From Regional Manager to Senior Director in Three Years 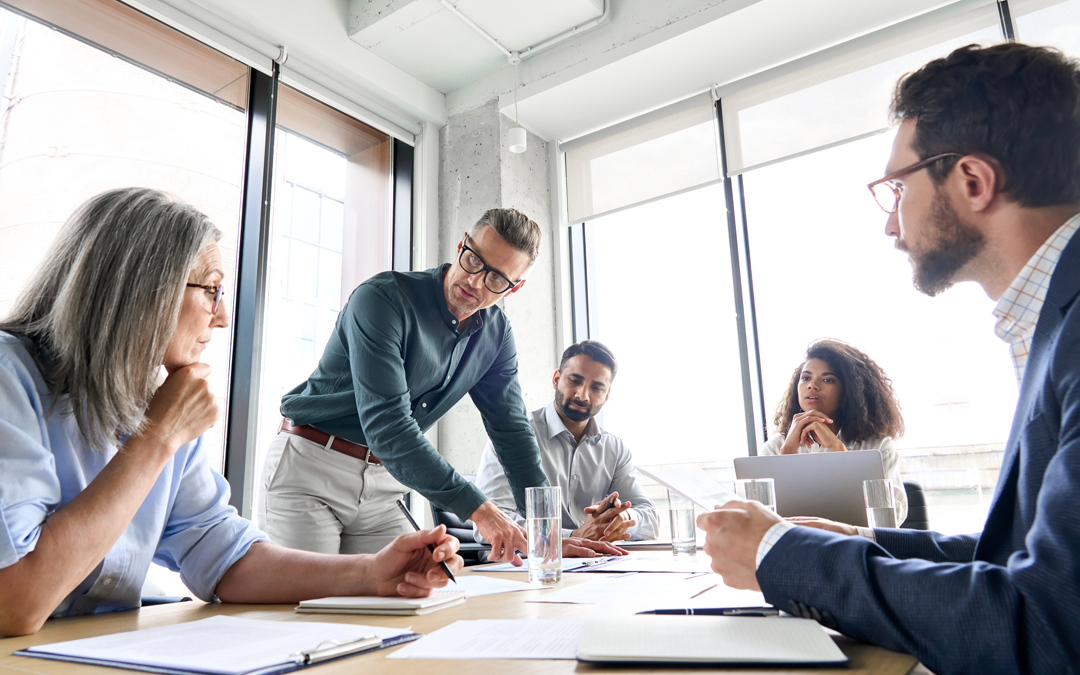 Matt Inkmann was a regional sales manager at a stewardship and communications company. While he was effective in his role and viewed as the guy who made his job “look easy,” he struggled with imposter syndrome, managing a team of 10. He wanted to become a better, more confident leader and knew he needed to build this skill to advance in his company. He also felt he had an idea of where he wanted to go with his professional development, but was unsure of how to get from point A to point B.

A colleague in Matt’s company referred him to Beth Miller at Executive Velocity. With her tireless dedication and leadership development strategies, he transformed professionally and personally. After three years of work with a professional business coach, he’s gone from a regional director to a national sales director to the now senior director of ad sales.

The Start of Holistic Leadership and Accountability Training – The Approach

Beth’s process for coaching Matt toward executive leadership success began with personality and skills assessment tests. Starting with this step gave Matt a solid baseline for who he is as a person and where he was starting out as a leader. She used this data to build a detailed development plan for coaching sessions.

“I was particularly impressed by the inclusion of the Business DNA behavioral assessment and the 360-degree approach of requesting direct employment reports and feedback from my peers and boss,” said Matt. Furthermore, he liked that her conclusions were not just based on cookie-cutter evaluations and suggestions.

To form the rest of the well-rounded assessment and foundation, she and Matt met with his boss, the vice president of sales. After that meeting, Beth developed a more robust plan that aligned with Matt’s priorities and those of his company. At this point, she could fully understand what direction they needed to go, and they defined initiatives they wanted to work on for development and growth.

Beth’s simple but effective real-world strategies after the initial assessment involved day-to-day focus work and meeting roughly every two weeks for a check-in or coaching session. On top of the scheduled sessions, Matt was able to check in with her about something or gain insight from her when an issue arose.

Even more importantly, Beth was there to help hold him accountable. Matt noticed she was adept at drilling down a task to its most actionable steps and laying out a plan for him to follow. “If I ever felt overwhelmed or lacking motivation, she was there to help me get back on track. The open communication style she cultivates with a client is like the backbone of accountability, helping them stick to an agenda and to-do list.”

Overcoming Imposter Syndrome One Day at a Time

Matt is upfront about struggles he had early on, including imposter syndrome. “Feeling like an Imposter is fairly common with people in leadership positions, but it doesn’t make it easier to handle.” He adds that Beth’s ability to strip Matt of this self-doubt over time was a game-changer for him.

Matt may have made management look easy before this kind of coaching, but it didn’t feel easy to him. One of the most significant gifts coaching has given Matt is the ability to stare down imposter syndrome daily and use that challenge to grow professionally and personally.

Reflecting on this process, Matt says, “Beth developed my confidence by teaching me to trust myself. She also taught me better conflict resolution, which was a particular leadership concern. Using mindset coaching techniques, she gave me the tools to believe in myself and my teams. Over time, this approach helped me minimize stress in my personal life and strengthen my professional life.”

Another skill Matt developed with coaching was an ability to prepare for difficult or unpredictable tasks. Beth shared that if a task seems complicated or you resist completing it, the problem is not you or your work ethic but a lack of preparedness.

Beth coached him to break down even the most seemingly insurmountable tasks into basic, less intimidating steps. When taking each step one at a time, an overwhelming task became more manageable.

During the course of their coaching relationship, Matt dramatically leveled up his executive leadership skills. He progressed towards leading a merger and acquisition between his company and another that would have been much more challenging (and less successful) without the professional development.

He also feels marked improvement in leading team members. “Where leading eight to ten people was difficult before, I now confidently oversee an organization of 140 team members. I can also transfer the skills learned in coaching to improve my teams’ accountability and conflict management, which can lead to significant promotions within my company.”

Above all, according to Matt, “Beth helps you become your genuine self. She parses your professional goals to ensure they align with your true values and then prioritizes each step required to achieve them. Because your goals are based on your values, Beth molds professional careers to the individual and never the other way around.”

With professional coaching, people learn not just how to navigate the executive ladder and rise within a company, but those skills also help them fulfill every other area in their lives. Through their work with a coach like Beth Miller, they become more complete people instead of compromising parts of themselves for professional ascension.