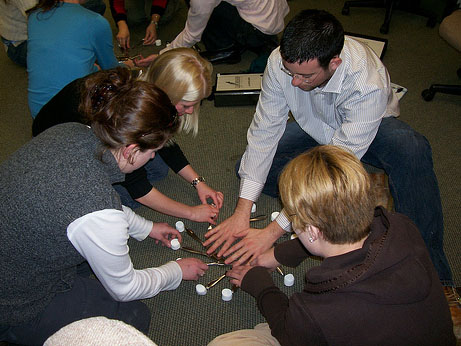 This is the second part of a two-part series on team roles and how they can help business executives build better teams. Part one discussed Belbin team roles, and in part two we will explore MTR-i team roles and the Four-Player Model, both of which are regularly used by organizations developing new teams and realigning existing teams.

The MTR-i team roles were produced on a different theoretical basis than Belbin team roles. These roles are also related to something else covered in my blog related to teams—Myers Briggs (MBTI) assessments. While the MBTI measures personality preferences, a person’s MTR-i roles change depending on the situation. The MTR-i is situational, so it is often used multiple times on the same person in the same company. Both MBTI and MTR-i are adaptations of Jung’s model of psychological types.

The MTR-i questionnaire, which is a tool used during executive coaching, will identify eight team roles that show what contributions each team member is making. The different roles are as follows:

Produce agreement and harmony across the team, trying to create a positive atmosphere and reaching a consensus among other team members.

Produce a sense of priority, stressing those issues that have most importance so that discussions are focused on the most valuable topics.

Seek variety and experimentation. They uncover new potential in situations and people and explore new and unusual ideas.

Produce a sense of imagination and contribute new and alternative perspectives and ideas. They are ideas-oriented.

Bring goals to fruition, producing action to address the most urgent matters and using tools or techniques that they know (from experience) will work.

Produce a clarification of ideas and information, producing a better knowledge and clearer picture of any situation.

Produce structure and introduce a logical organization into the way things are done.

Produce explanation of what is happening and the cause of problems, and generate models to demonstrate how things work.

The Four-Player Model and its use in business teams

Team leaders can also use the four-player model to ensure that multiple sides are presented in a team, which can enhance creativity and innovation. The model can help team members grow by giving them a broader perspective of the issue at hand.

Deborah Ancona and William Isaacs proposed this approach to team theory. They believed that what determined an effective team is whether or not these roles are performed appropriately and in the proper sequence.

If you want to try their method out, assign people specific roles and then, after a set length of time, switch the roles. This kind of experiment can get people thinking in new ways; however, it can also be uncomfortable at first. And it can be challenging to those who have difficulty with change. The four roles are below:

This role establishes direction and sets the team in motion.

This role supports the “move” role and helps complete the action.

This role questions the move that has been brought forward.

This role provides perspective and invites the team to be more reflective.

Teams are important—and becoming more so—for all areas of business. Understanding how teams work is a valuable skill, and team role theory is one aspect of building better teams. If you’re looking for more, check out four do’s and don’t’s of team building.

How would you integrate team role theory into a new team that you will need to form or an existing team?