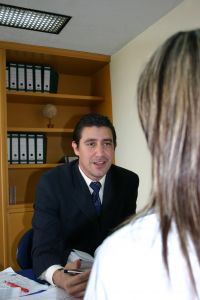 Most of us know that communication is made up of words, tone, and body language. In addition, these three components are not equal in their impact.  Words make up only 7% of a message’s meaning.  While tone accounts for 38% and body language tops the list at 55%.

In a book titled “Interviewing: Principles and Practices” Charles Stewart and William Cash Jr. describe an interview as a,

“An interactional communication process between two parties, at least one of whom has a predetermined and serious purpose, that involves the asking and answering of questions.”

Therefore most of the emails that are sent back and forth between staff members or to the leaders of an organization are, in some way or another, an interview.

So why is it that in the case of many crucial communicative situations, we continue to converse via email?

The difference between talking and communicating is the act of sending and receiving.  However without a face-to-face or at least verbal situation, a disconnection is created due lack of verbal and non-verbal cues. Ergo, we are no longer communicating. We are simply talking at one another.

My theory is that email less confrontational and allows a person to send a message, without having to receive any sort of feedback. Yet, what generally happens is this creates a pitfall and turns into a much larger conflict.

Chief Executive Thierry Breton of Atos, a French technology firm with 74,000 employees in 42 countries, announced that he is going to be phasing out emailing due to the fact that only 10% of all emails sent are actually relative to the day-to-day work.  Breton also told The Wall Street Journal that he feels that his employees would rather communicate using communication tools such as email, text, or instant messaging as opposed to face-to-face conversation.  But is that really a problem?

According to the Pew Research Center during a study in September of last year, 95% percent of Americans ages 18 to 24 send or receive an average of 109.5 texts per day.  This is double the amount that someone ages 25 to 34 would send, meaning that a large majority of your staff could quite possibly be communicating textually more than verbally on a daily basis.

So why not just pick up the telephone?

Well if we refer back to Stewart and Cash,

“Some studies comparing telephone and face-to-face interviews suggest that the two methods produce similar communicative results, with respondents giving fewer socially acceptable answers over the telephone and preferring the anonymity it provides.”

We become brave when we are not seen.  We can say things over the phone that we would never say to a person face-to-face, which once again creates a conflict that never needed to arise.

It is the essential non-verbal cues that make face-to-face communication the undeniable winner. So before you have to communicate by email or phone, I want you to think about how it will impact an employee’s:

If the communication will impact any of the above, then have a personal meeting with the employee, because the matter of fact is, nothing will ever beat face-to-face communication.